Give Up, Give In and Submit

A lot of times we identify with something we think we are or have been told we are, good or bad. Most of my life I was told that I'm stubborn and I lived up to what people called out in me. I took it as a compliment growing up and still believe in some ways it can be. I'm tenacious and I will keep fighting for whatever the Lord puts in front of me. I've also been know to be stubborn to a fault.

Many of us try to hide certain aspects of ourselves that we don't want other people to see. Mine was the internal battle with old wounds. I didn’t want anyone to think they could hurt me again so I was super tough. That's how I identified myself. I wasn't allowing anyone to get through the wall I had placed around myself.

It can seem easier not to allow access to our hearts than run the risk of any pain. Unfortunately that includes shutting out a lot of other feelings that come along with opening ourselves up.

I've been reading out of the Old Testament lately, which I love. I used to overlook most of the Old Testament as I just thought they were just stories and not really relevant to modern day life. Oh how wrong I was! There's so much good to be had from looking back on the lives of these men and women who went through similar things just in a different time.

When you think of Samson how do you identify him? Most often it's either because of his hair or because of the strength tied in with his hair. There was more to Sampson than first meets the eye however. He had been set aside as a man of God at birth. He made numerous mistakes, as well as one huge one laying his head in the lap of trouble. (see Judges 16)

It's easy to look back now and see what a huge mistake his decision was but how many of us have made similar mistakes. How often do we take for granted the strength the Lord gives us and over time start thinking that we're capable of managing life in our own strength. Thinking we can be strong enough to deal with the crap that gets thrown at us and we can do it on our own - we don't need God.

I was there for so long! I was strong enough. I was tough enough. I didn't need anyone and this included God, but I finally came to a place where I just had to give up. I wasn't as strong as I thought. Life got hard and the harder I tried to stand up against it the harder it knocked me down.

Giving up to me had always been a sign of weakness. It went against everything I identified myself as - strong, stubborn, tenacious - there was no way giving up could mean anything good. I learned that it is not surrendering but submitting. I leaned into the Lord and said, “Here it is, I can't do this without you.”

When Samson laid his head in Delilah's lap he learned the hard way that his power truly only came from the Lord. It wasn't him! 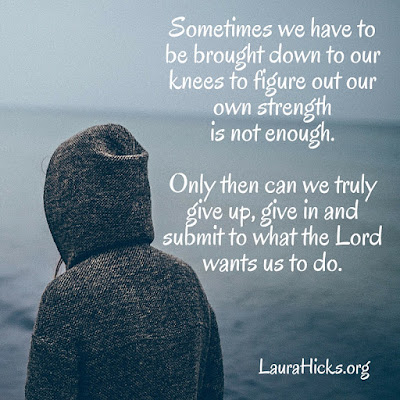 Sometimes we have to be brought down to our knees to figure out that our own strength is not enough. Only then can we truly give up, give in and submit to what the Lord wants us to do.

Let me assure you there is freedom in submitting!

I am learning that we are stronger and braver than we think we are, in the Lord. We simply need to give up all the preconceived notions about strength and bravery and trust the Lord with His strength.

Today let's dare to move out behind the walls and just dance in the freedom that only God can give.