Is Redemption Only for the Select Few?

God’s redeeming grace is only for a select few, right? If you’ve ever felt that way we can relate!


I was sure at one point in my life that redemption was reserved for the special people. Not the people with so many flaws like myself. Only people God could use for His glory.


Even though I’d heard about God while I was growing up and even how He had used ordinary people to do extraordinary things, I still figured it was just for the special ones. The ones without a “history”.


Once you feel rejected or abandoned by humans it’s too easy to shift that same viewpoint to God. Unworthy of being in that special group of chosen people.


Most of us have heard the story of Rahab. She was a “working” woman with quite a past. Joshua 2:1b (NIV) says - So they went and entered the house of a prostitute named Rahab and stayed there.


Joshua had sent the two spies to look over the land of Jericho. The king found out about them being at Rahab’s house and called her out on it. She lied to the king and said the spies had left the city. 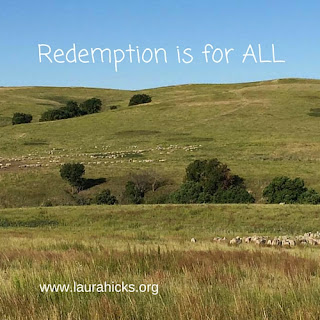 Not exactly the most likely candidate for being called into the “special group” right? I mean she came from a people that opposed God. She was a woman with a sordid past and she told a bald faced lie.


But, God is love and He wants to set us free from our past. He’s ready and willing to loose the chains that hold each of us. He doesn’t wait for us to become perfect before He moves in us.


Rahab had heard about God and despite her past she was willing to step out in faith. Yes, there were many human flaws in her but nothing God didn’t already know about. He didn’t look at her in disgust. He saw the small glimmer of light in her heart and set about redeeming the brokenness of her humanity.


By faith the prostitute Rahab, because she welcomed the spies, was not killed with those who were disobedient. Hebrews 11:31 (NIV)


Many times we convince ourselves that we’re not truly worthy of redemption. That the chains that hold us are so much different than other people’s. There must be something different about them to make them worthy of truly being set free from the bonds that held them.

Redemption is available to all without cost or exception.


This righteousness from God comes through faith in Jesus Christ to all who believe. There is no difference, for all have sinned and fall short of the glory of God, and are justified freely by his grace through the redemption that came by Christ Jesus. Romans 3:22-24 (NIV)
We have all fallen short of the mark and can’t earn redemption on our own. The power of redemption doesn’t come from the one being redeemed but from the Redeemer!

Tweet: Give God full access to those broken places of your life and allow His redeeming grace to set you free!