Then God Made a Cowboy 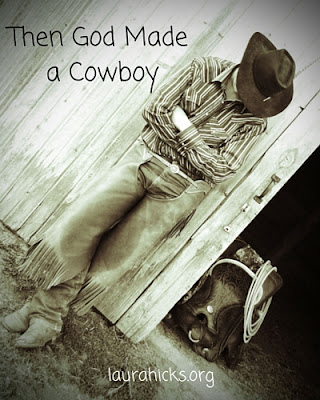 When I was a child, I spoke and thought and reasoned as a child.
But when I grew up, I put away childish things.
1 Corinthians 13:11 (NLT)

The picture above is of my oldest son, Dustin. He will be 21 right after Christmas this year. I miss the days of him reaching up to grab my hand as I answered endless questions about why bugs are the way they are. I’m so blessed though as he’s grown into a man and I'm so proud to call him my son.

He epitomizes everything that comes to mind when I hear the word cowboy. He's hard working, honest, tough and gritty. He stands up for what he believes in and can be stubborn to a fault. He has a huge respect and genuine care for animals. He tries hard to listen and learn from those who have been ranching longer but is also finding his voice to throw new idea's out.

He comes from a long line of people that work hard and joke around just as hard. He didn't fall far from the tree on that one either! He's not bashful about who and what he is and you can either like him or not, your choice. It won't change him. I love that there is no shame for him to hug me or tell me he loves me in front of others.

We have our disagreements, as families will, but he's quick to apologize if he needs to. Just as quick to point out if it's me that needs to do the apologizing!

We were gathering cows a couple of years ago and I was telling him what he needed to do way more than any kid needs. He waited, with more patience than I could have ever mustered myself, until we got to the corral to say, "Mom, when you look at me on this horse, do you still see a 7 year old boy?  Cause that's what you're treating me like." He didn't say it snippy but very matter of fact and it was a reminder I needed.

There’s something to be said for being called out in truth and love. A bit of an abrupt wake up call out of some sort of dreamy fog we’ve dragged our heels on leaving. Our eyes are finally wide open and we fully grasp the truth and realize it’s a beautiful thing to see.

It’s an immense challenge for many of us mama’s to see our children growing up and maturing. On one hand, we know what’s best for them and cheer them on to maturity and independence. On the other hand, how sweet would it be for them remain little's forever.

Spiritual maturity is of the utmost importance however. As a parent we guide them and show them what a relationship with God looks like but it’s up to them in the long run to walk out that relationship in their own way.

Children grow and mature and we bless them as we watch them walk forward into adulthood. Supporting them to the best of our abilities, all the while, stepping back to allow them to make their own decisions. Prayerfully trusting God through it all.