It’s lambing season at my house and it is just flat exhausting! You go nonstop. Sometimes I struggle to put one foot in front of the other honestly.

I was telling a friend the other day that I felt like I was drowning. It was like I was desperately treading water just to try and keep my nose above it.

In the middle of all the physical, mental and even spiritual struggles though was a gift from God. Small miracles I got to witness on a regular basis.

One particular revelation God gave me had me in tears. I’m not really an emotional person by nature and some of it could have been the exhaustion but most of it was just being in awe of how great our God is!

We had moved some ewes and young lambs to the “pair pasture” in the early afternoon. We went back that evening to check on them. One lamb was missing! His mother was desperately running all over calling to him but with no luck.

We spent the next 2 hours looking for a lamb in several hundred acres. Talk about a needle in a haystack! I prayed for my eyes to be opened and the Lord to give me direction. We covered every inch of that pasture. I finally gave up and was very frustrated. I figured an eagle had gotten him as they’re very hard on new lambs.

I went home feeling defeated as this is my flock and I want them all to do well! I went to bed praying that if by some miracle he was still alive that God would help him and his mother find each other.

The next morning I headed out as soon as it was light fully prepared to look again. Within minutes of getting out there though I found his mother and right there with her was her lamb. Wow! It was a miracle.

To say I was overjoyed is an understatement. I even had to hug the dog that was with me. The lost lamb had returned and I was celebrating.

God laid it on my heart right there that the joy I felt over that lamb being found paled in comparison to the joy in heaven when a lost sinner finds their way to God. 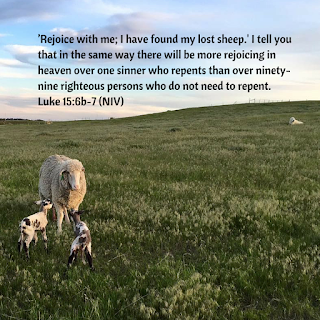 This scripture was truly brought to life for me right there on that hillside. I got a tiny glimpse of the joy that is in heaven every time a lost sinner repents.

Jesus told us in Matthew 28:19, “Therefore go and make disciples of all nations, baptizing them in the name of the Father and of the Son and of the Holy Spirit.”

Lord, open my eyes to those that are lost and need help to find you. I want to rejoice with all of heaven when the lost are found! In Jesus’ Name, Amen. 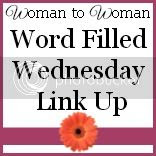 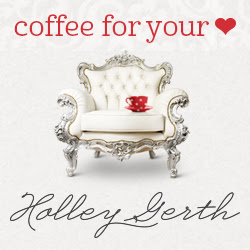