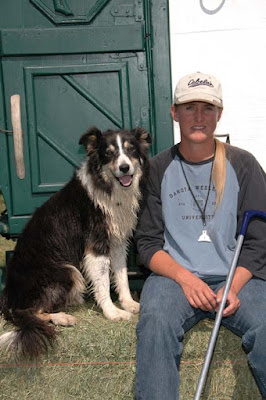 Zac was a working Border Collie. He was also my teacher and partner. Some people would say his life revolved around working livestock, but he loved working with me even more.

I had just started training dogs to work livestock when Zac was born. The minute I looked into his big, brown eyes, I knew he was put on the earth to be mine. The connection was immediate.

He was one of the smaller pups in the litter and not the most athletic of the bunch but he could be downright bossy with livestock. He’d politely “ask” once, maybe even twice, but the third time there were going to be consequences for any animal that didn’t obey him.

One day in the prime of Zac’s life, a massive fire raged in the buffalo pasture next to one of our summer pastures. My husband was on the fire line and called over the CB radio to ask me to move our cows and sheep out of the way of the fire. I quickly saddled a horse, grabbed Zac and my other dog Kat, and loped out across the hills to hustle the livestock to safety.

Several hundred disoriented sheep were pressed up against the fence in the middle of a huge cloud of smoke. There wasn’t any time for subtleties. “Get ’em up!” I hollered to the dogs. They knew from past experience and the urgency in my voice that it was time to push, and push hard.

The sheep resisted at first and tried to beat the dogs back. The dogs and I won out, however, and over the hill we went with the whole bunch at a high lope. They raced on until we came to a water tank.

The sheep had been standing in the smoke for quite some time, and they hit the tank hard. The lambs were still quite small at the time, and many got shoved right in. They couldn’t reach the bottom and were already exhausted, so it didn’t take long before several of them were in real trouble. I jumped off my horse and started grabbing the lambs nearest the edge to drag them out.

The tank was both deep and wide, and many lambs were out too far for me to reach them from the edge. I started pulling off my boots and was headed in to pull them out before they drowned. Zac had been watching me the whole time, and before I could even put a foot into the tank myself, he jumped in.

He swam out and grabbed a lamb by the tail, and like any good lifeguard, dragged them one at time to the edge where I could pull them out. He didn’t quit until the last one was rescued. I didn’t say one word to him during the process. He just knew what needed to be done and shot into action.

As we both stood there trying to catch our breath afterwards, I reached down and stroked his head, reminding him once again how much I thought of him. He gently wagged his tail and looked deep into my soul like he always did.

There wasn’t much time for affection or to kick back as we still had cows to move away from the approaching blaze. We hustled off in the direction my husband said he thought they were last seen. As we topped the last hill, they were already crossing a fence that had been cut to let firefighters into the buffalo pasture. The dogs and I worked quickly to herd the cows back to safety.

As we were moving them down the first hill, Kat heeled one cow to hurry her as Zac crossed behind her. A heavy kick from the cow landed squarely on Zac, and he went flying through the air. After what seemed like forever, he landed hard. I raced down to check on him, but before I could get there, he was already up and headed back to work. I figured he was okay, and we continued moving cows for another hour.

When all the livestock was safely out of the way of the oncoming fire, the dogs and I headed for home. We took a much-needed break and lounged around for a bit. An hour or so later, I walked out to feed the dogs, and Zac couldn’t stand up. He tried several times, but despite no yelps of pain, it was evident he was hurting. I quickly set out with him on the hour-long drive to the nearest veterinary clinic.

My vet checked him over and discovered through an X-ray that Zac’s hip had been broken. My heart ached for the lousy job I’d done of looking out for my best friend. He never whimpered or cried when the cow kicked him. Not once did he try to quit in the hour of pushing cows after it happened. There never was a growl toward the vet or me as we poked and prodded to fix what must have hurt so badly.

As I fought back tears of regret, Zac lay on the steel table and licked my face, reassuring me everything would be all right. He was right, as usual. He healed, and we had many more years of partnership. Despite some arthritis in his old age, he lived a long, wonderful life, always by my side. I will forever be grateful for the gift of Zac’s faithful heart and his dedication to our work together. 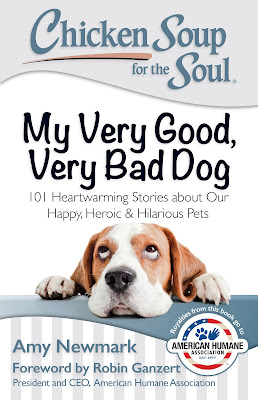 Enter to win a signed copy of this Chicken Soup book below.
Enter up to 4 different ways for more chances to win!